An Emerging Online Fintech Market in 2008

I’m penning this article as in 2008-2009 I launched one of Australia’s first peer to peer lending platforms called LendingHub which ultimately wasn’t successful it taught me a lot about building a custom technology platform and attempting to tackle a very new alternative disruptive model. 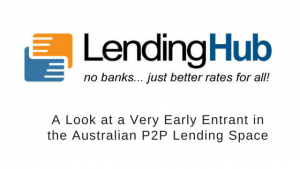 In 2008 I was working at Fairfax Media in a senior corporate strategy role having recently come from the world of investment banking. Online models and platforms (such as online classifieds, auctions and community forums) were starting to disrupt a number of sectors in Australia particularly traditional news and ad based media. The fintech industry was primarily driving innovation in online brokerage, financial information and starting to hide business news behind subscriber paywalls.

Peer to peer models had started to emerge in the UK, Zopa and the US with LendingClub, Prosper and Kiva (micro loans for entrepreneurs in developing economies). These models were viewed as interesting but risky experiments that wouldn’t gain traction with consumers and ultimately would simply be a breeding ground for scams and low quality borrowers (much like the ICO market is viewed at the moment).

In 2008 it seemed like the Australian banking market was ripe for disruption, the big four banks were pulling in bigger than ever profits, they had not evolved their old-school business lending models and they continued to operate on 1980s technology which depended on a lot of staff, branches and manual processes. A P2P (peer to peer or social lending) platform offered the prospect of lower operating costs, rate transparency through an auction style bidding mechanism and a pure online transaction model that would have been a first in Australia amongst all the financial institutions.

In mid-2008 myself and my co-founder started talking to potential corporate and private investor partners – key sticking points was the disbelief that a P2P model would ever succeed – it was viewed as a fad or trend and early successes in the UK and US where offset by regulatory issues in countries such as Italy.

Without corporate or venture capital backers we bootstrapped the technology build and initial marketing, effectively creating Australia’s first p2p lending platform connecting borrowers looking for personal loans with investors using a rate auction model. On successful funding of a loan the platform would manage the settlement, collection of funds and recurring repayment of loans.

Additional challenges at that time were things such as direct debits from bank accounts still relied on physical signatures (digital signatures were just not accepted) and high transaction costs imposed by the banks (distributed payment technology based on blockchain will take this source of income away from the banks eventually).

We launched the platform at LendingHub.com.au in 2009 and received significant media and TV exposure, however investors showed a complete lack of interest and P2P models still rely on institutional investors to provide the bulk of funds particularly in the early stages.

Eventually LendingHub ran out of funds and alternate players such as Ratesetter and SocietyOne managed to gain institutional acceptance on the back of early entrants.

Fintech propositions competing against the banks need to be well funded, there’s significant demand for alternate services however trust is a big challenge. The regulatory environment is constantly changing and in Australia tends to work against innovation and new ventures – let’s see how the current new round of crowdfunding legislation works.

For those interested you can see the original pitchdeck for LendingHub from 2008.